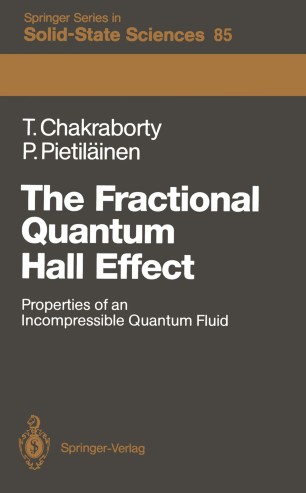 Properties of an Incompressible Quantum Fluid

The experimental discovery of the fractional quantum Hall effect (FQHE) at the end of 1981 by Tsui, Stormer and Gossard was absolutely unexpected since, at this time, no theoretical work existed that could predict new struc­ tures in the magnetotransport coefficients under conditions representing the extreme quantum limit. It is more than thirty years since investigations of bulk semiconductors in very strong magnetic fields were begun. Under these conditions, only the lowest Landau level is occupied and the theory predicted a monotonic variation of the resistivity with increasing magnetic field, depending sensitively on the scattering mechanism. However, the ex­ perimental data could not be analyzed accurately since magnetic freeze-out effects and the transitions from a degenerate to a nondegenerate system complicated the interpretation of the data. For a two-dimensional electron gas, where the positive background charge is well separated from the two­ dimensional system, magnetic freeze-out effects are barely visible and an analysis of the data in the extreme quantum limit seems to be easier. First measurements in this magnetic field region on silicon field-effect transistors were not successful because the disorder in these devices was so large that all electrons in the lowest Landau level were localized. Consequently, models of a spin glass and finally of a Wigner solid were developed and much effort was put into developing the technology for improving the quality of semi­ conductor materials and devices, especially in the field of two-dimensional electron systems.