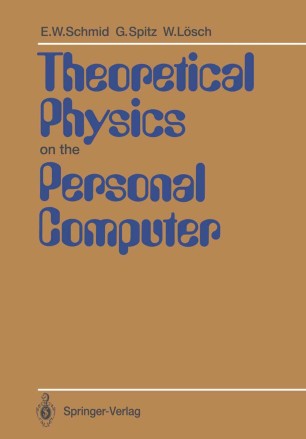 Theoretical Physics on the Personal Computer

We would like to thank Mr. A.H. Armstrong, who translated this book, for his many valuable suggestions and corrections. We also acknowledge a stimulating response from our readers. Mr. J. Peeck sent us a diskette containing the pro­ grams modified to run on an ATARI computer. Mr. H.U. Zimmermann sent us diskettes, on which the graphics software of the book is adapted to the require­ ments of the FORTRAN-77 compiler by MICROSOFT. Readers interested in these adaptations should contact the authors. Tiibingen, January 1988 E. W. Schmid, G. Spitz v Preface to the German Edition This book is based on the lecture course "Computer applications in Theo­ retical Physics", which has been offered at the University of Tiibingen since 1979. This course had as its original aim the preparation of students for a nu­ merical diploma course in theoretical physics. It soon became clear, however, that the course provides a valuable supplement to the fundamental lectures in theoretical physics. Whereas teaching in this field had previously been prin­ cipally characterised by the derivation of equations, it is now possible to give deeper understanding by means of application examples. A graphical presen­ tation of numerical results proves to be important in emphasizing the physics. Interaction with the machine is also valuable. At the end of each calculation the computer should ask the question: "Repeat the calculation with new data (yes/no)?". The student can then answer "yes" and input the new data, e.g.
Floppy disk/supplementary electronic material no longer available.