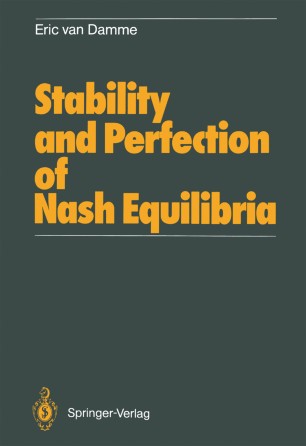 Stability and Perfection of Nash Equilibria

The last decade has seen a steady increase in the application of concepts from noncooperative game theory to such diverse fields as economics, political science, law, operations research, biology and social psychology. As a byproduct of this increased activity, there has been a growing awareness of the fact that the basic noncooperative solution concept, that of Nash equilibrium, suffers from severe drawbacks. The two main shortcomings of this concept are the following: (i) In extensive form games, a Nash strategy may prescribe off the equilibrium path behavior that is manifestly irrational. (Specifically, Nash equilibria may involve incredible threats), (ii) Nash equilibria need not be robust with respect to small perturbations in the data of the game. Confronted with the growing evidence to the detriment of the Nash concept, game theorists were prompted to search for more refined equilibrium notions with better properties and they have come up with a wide array of alternative solution concepts. This book surveys the most important refinements that have been introduced. Its objectives are fourfold (i) to illustrate desirable properties as well as drawbacks of the various equilibrium notions by means of simple specific examples, (ii) to study the relationships between the various refinements, (iii) to derive simplifying characterizations, and (iv) to discuss the plausibility of the assumptions underlying the concepts.