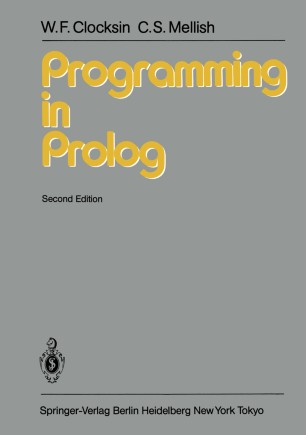 Since the first publishing of Programming in Prolog in 1981, Pro­ log has continued to attract an unexpectedly great deal of interest in the computer science community and is now seen as a potential ba­ sis for an important new generation of programming languages and systems. We hope that Programming in Prolog has partially satisfied the increasing need for an easy, yet comprehensive introduction to the language as a tool for practical programming. In this second edition we have taken the opportunity to improve the presentation and to correct various minor errors in the original. We thank the many people who have given us suggestions for corrections and improvement. W. F. C. C. S. M. Cambridge, England August, 198-1 Preface to the First Edition The computer programming language Prolog is quickly gaining popularity throughout the world. Since its beginnings around 1970, Prolog has been chosen by many programmers for applications of symbolic computation, including: • relational databases • mathematical logic • abstract problem solving • understanding naturallangur~ge • design automation • symbolic equation solving • biochemical structure analysis • many areas of artificial intelligence Until now, there has been no textbook with the aim of teaching Prolog as a practical programming language. It is perhaps a tribute to Prolog that so many people have been motivated to learn it by referring to the necessarily concise reference manuals, a few published papers, and by the orally transmitted 'folklore' of the modern computing community.