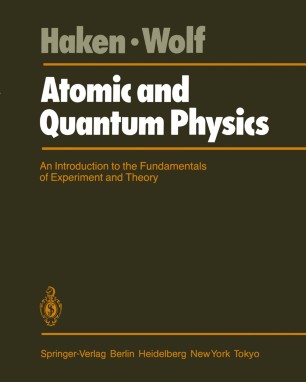 An Introduction to the Fundamentals of Experiment and Theory

A thorough knowledge of the physics of atoms and quanta is clearly a must for every student of physics but also for students of neighbouring disciplines such as chemistry and electrical engineering. What these students especially need is a coherent presenta­ tion of both the experimental and the theoretical aspects of atomic and quantum physics. Indeed, this field could evolve only through the intimate interaction between ingenious experiments and an equally ingenious development of bold new ideas. It is well known that the study of the microworld of atoms caused a revolution of physical thought, and fundamental ideas of classical physics, such as those on measur­ ability, had to be abandoned. But atomic and quantum physics is not only a fascinating field with respect to the development of far-reaching new physical ideas. It is also of enormous importance as a basis for other fields. For instance, it provides chemistry with a conceptual basis through the quantum theory of chemical bonding. Modern solid-state physics, with its numerous applications in communication and computer technology, rests on the fundamental concepts first developed in atomic and quantum physics. Among the many other important technical applications we mention just the laser, a now widely used light source which produces light whose physical nature is quite different from that of conventional lamps. In this book we have tried to convey to the reader some of the fascination which atomic and quantum physics still gives a physicist studying this field.