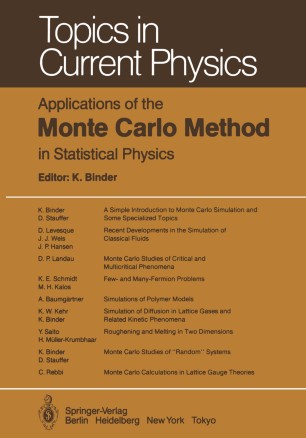 Applications of the Monte Carlo Method in Statistical Physics

Monte Carlo computer simulations are now a standard tool in scientific fields such as condensed-matter physics, including surface-physics and applied-physics problems (metallurgy, diffusion, and segregation, etc. ), chemical physics, including studies of solutions, chemical reactions, polymer statistics, etc. , and field theory. With the increasing ability of this method to deal with quantum-mechanical problems such as quantum spin systems or many-fermion problems, it will become useful for other questions in the fields of elementary-particle and nuclear physics as well. The large number of recent publications dealing either with applications or further development of some aspects of this method is a clear indication that the scientific community has realized the power and versatility of Monte Carlo simula­ tions, as well as of related simulation techniques such as "molecular dynamics" and "Langevin dynamics," which are only briefly mentioned in the present book. With the increasing availability of recent very-high-speed general-purpose computers, many problems become tractable which have so far escaped satisfactory treatment due to prac­ tical limitations (too small systems had to be chosen, or too short averaging times had to be used). While this approach is admittedly rather expensive, two cheaper alternatives have become available, too: (i) array or vector processors specifical­ ly suited for wide classes of simulation purposes; (ii) special purpose processors, which are built for a more specific class of problems or, in the extreme case, for the simulation of one single model system.