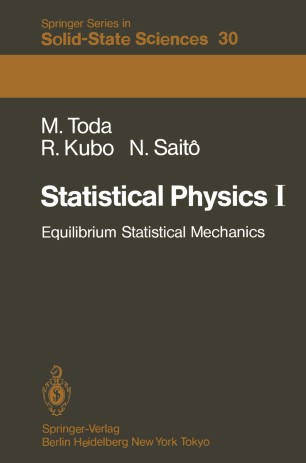 This first volume of Statistical Physics is an introduction to the theories of equilibrium statistical mechanics, whereas the second volume (Springer Ser. Solid-State Sci., Vol. 31) is devoted to non equilibrium theories. Particular emphasis is placed on fundamental principles and basic con­ cepts and ideas. We start with physical examples of probability and kinetics, and then describe the general principles of statistical mechanics, with appli­ cations to quantum statistics, imperfect gases, electrolytes, and phase tran­ sitions, including critical phenomena. Finally, ergodic problems, the me­ chanical basis of statistical mechanics, are presented. The original text was written in Japanese as a volume of the Iwanami Series in Fundamental Physics, supervised by Professor H. Yukawa. The first edition was published in 1973 and the second in 1978. The English edition has been divided into two volumes at the request of the publisher, and the chapter on ergodic problems, which was at the end of the original book, is included here as Chapter 5. Chapters 1,2,3 and part of Chapter 4 were written by M. Toda, and Chapters 4 and 5 by N. Saito. More extensive references have been added for further reading, and some parts of the final chapters have been revised to bring the text up to date. It is a pleasure to express my gratitude to Professor P. Fulde for his detailed improvements in the manuscript, and to Dr. H. Lotsch of Springer­ Verlag for his continued cooperation.