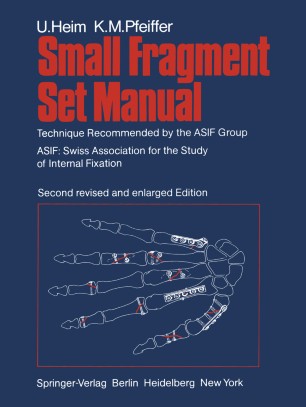 Technique Recommended by the ASIF Group

The rapid development in the surgical treatment of fractures during the past 9 years has necessitated considerable modifications to the first edition of this book. Numerous new implants and instruments are presented in this, the second edition. In 4.0-, 3.5- and 2.7-mm screws the hexagonal socket has definitively superseded the Phillips head, while mini-implants have been modified and a 1.5-mm screw introduced. A number of new plates and implants have been introduced and have long since proved their value. At the same time new techniques, described here, have been developed and applied. The tension-band wire is included, despite the fact that it does not consist of specific AO implants, and use of the Kirschner wire is also illustrated and emphasized whenever the authors consider that this simple method is still the best available. Alterations in the organization of the book have been necessary: the shoulder, the forearm and the knee are treated in separate chapters, and other sections have been extended. With regard to clinical-radiological examples, new typical situations are described and documented. The case studies from the first edition have been recontrolled in all instances in which it was feasible to do so. In this way many valuable late results, 9-12 years after internal fixation, were obtained. We found that almost all joints had remained stable after healing of an articular fracture; so-called late arthrosis is rare in the peripheral skeleton.