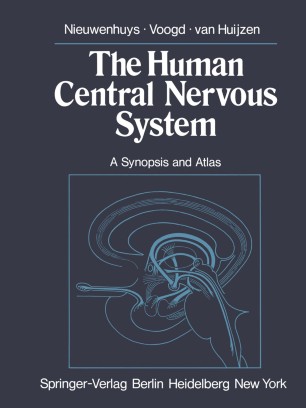 A Synopsis and Atlas

Purpose and Plan This atlas, though primarily intended for medical students, mayaiso be expected to This atlas has been designed with the object be useful as a quick pictorial review for of providing a comprehensive pictorial practitioners in the various neurological survey of the macroscopic and microscopic SClences. structure of the human central nervous s- tem. The pictorial material encompasses 154 Material, Techniques, and Preparation half-tone and li ne drawings, all derived of the Illustrations from original macroscopic and microscopic preparations. Considerable thought has The gross anatomical section of this atlas been given in the preparation of these draw­ is based on eight brains and one spinal cord of adult individuals with no record of n- ings to an optimal combination of c1arity and exactness. Moreover great pains have rological diseases. These specimens were been taken to achieve a maximal coherence fixed for at least two months in formalin. of thematically related figures. The illustra­ One specimen was used for the illustrations tions are arranged in four sections. The first showing the external morphology. This section depicts the gross appearance and brain was then serially sliced into 2-mm­ three-dimensional structure of the brain thick sections in the coronal plane. Three and spinal cord. The second section in­ other brains were sliced in the three other c1udes dra wings of a number of wh oIe brain conventional planes: sagittal, horizontal slices, sectioned in four different directions.