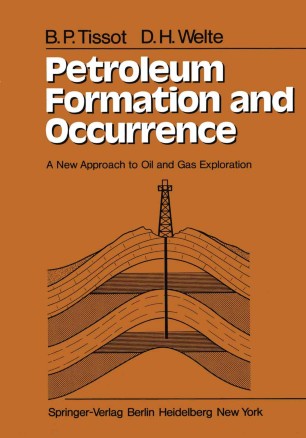 A New Approach to Oil and Gas Exploration

The publication of this book Petroleum Formation and Occurrence by Bernard Tissot and Dietrich Welte will indeed be welcomed by pertroleum geologists, petroleum geochemists, teachers and students in these fields, and all others who are interested in the origin and accumulation of hydrocarbons in nature. It is indeed a privilege for us to have the opportunity of sharing with these two eminent scientists the wealth of information they have acquired and developed during long careers devoted to concentrated scholarly study and practical investigation of the nature, origin, and occurrence of petroleum. Professor Bernard Tissot graduated from the Ecole Nationale Superieure des Mines in 1954 and from the Ecole Nationale Superieure du Petrole in 1955. In 1955 he received a D. E. S. in geology from the University of Grenoble and then began research work on petroleum geology at the Institut Fran~ais du Petrole. He was made head of the Department of Geochemistry in 1965, and since 1970 has also been teaching organic geochemistry at the Ecole Nationale Superieure du Petrole where he became Profes­ sor in 1973. Professor Tissot has had a broad and varied background of practical experience. He has been a member of exploration teams in France, New Caledonia, and Sahara. In 196G-1963 he headed a mission of the IFP to the Department of National Development of Australia.