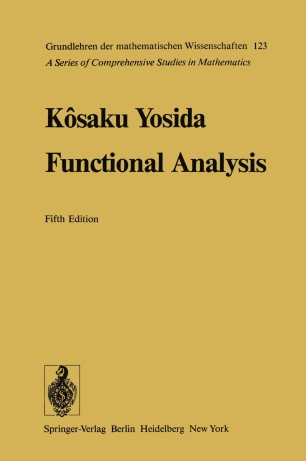 The present book is based on lectures given by the author at the University of Tokyo during the past ten years. It is intended as a textbook to be studied by students on their own or to be used in a course on Functional Analysis, i. e. , the general theory of linear operators in function spaces together with salient features of its application to diverse fields of modern and classical analysis. Necessary prerequisites for the reading of this book are summarized, with or without proof, in Chapter 0 under titles: Set Theory, Topo­ logical Spaces, Measure Spaces and Linear Spaces. Then, starting with the chapter on Semi-norms, a general theory of Banach and Hilbert spaces is presented in connection with the theory of generalized functions of S. L. SOBOLEV and L. SCHWARTZ. While the book is primarily addressed to graduate students, it is hoped it might prove useful to research mathe­ maticians, both pure and applied. The reader may pass, e. g. , from Chapter IX (Analytical Theory of Semi-groups) directly to Chapter XIII (Ergodic Theory and Diffusion Theory) and to Chapter XIV (Integration of the Equation of Evolution). Such materials as "Weak Topologies and Duality in Locally Convex Spaces" and "Nuclear Spaces" are presented in the form of the appendices to Chapter V and Chapter X, respectively. These might be skipped for the first reading by those who are interested rather in the application of linear operators.