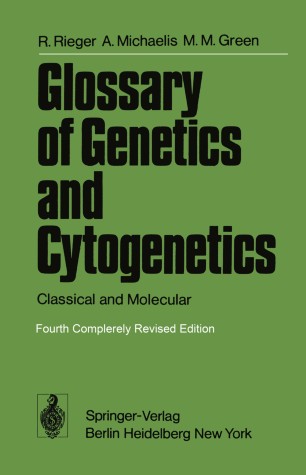 Glossary of Genetics and Cytogenetics

In preparing the new completely revised edition of this glossary, which in the meantime has been translated into Russian and Polish, we have attempt­ ed to include the most important new terms and to revise the text in those cases where new data demanded it*. As a result about fifty percent of the text is completely rewritten. Once more we have tried to provide material suitable and usable both for students and research workers. Accordingly, depending upon our evaluation, some terms have been simply defined, others have been described at some length even to the extent of providing experi­ mental data. Wherever possible, synonymy and redundancy have been pointed out, and in the interest of historical accuracy the individual respon­ sible for introducing a particular term or concept listed with the specific paper included in the literature citations. Cross references between related terms are designated by an arrow (---*) before each relevant term. To keep the book, as far as possible, to a reasonable size the terms carried over from the earlier edition have once more been critically selected and, where necessary, revised. In spite of these efforts a certain increase in volume was unavoidable. We hope that the new edition will once more prove useful to a wide audience and enjoy the same cordial reception as the earlier ones. Comments and suggestions from the reviewers and users of the earlier editions have contribut­ ed signifiClllltly to the revision.