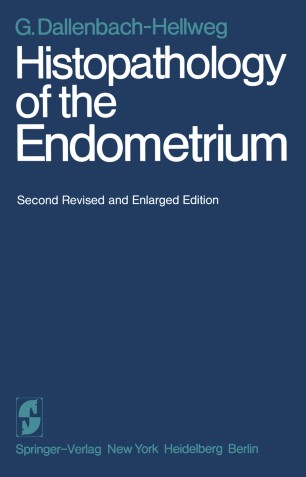 Histopathology of the Endometrium

The great advances in knowledge of endometrial physiology and pathology made since the first edition of this monograph have compelled me to revise it. Although I have maintained the general plan in this second edition, many sections, especially those dealing with endometrial tumors and with endometrial changes caused by hormonal treatment, contraceptive agents and devices have been in large part rewritten. The sections on procedures for obtaining endometrial tissue, on functional disturbances and spontaneous abortion have been changed or expanded to incorporate new facts from recent discoveries that now appear to be significant. Only time, however, will prove their true value. All chapters have been scrutinized to insure they comprise only precise and up-to-date information. To complement the revisions and to replace previous illustrations 36 new photographs have been added. In accordance with all these improvements, the bibliography has been amended, with pertinent new references included and those deemed obsolete omitted. The author acknowledges with gratitude the help from thoughtful correspon­ dents who have suggested valuable changes or brought to her attention omissions or errors that inadvertently appeared in the first edition. Every effort has been made to rectify such mistakes. Again, the Springer Verlag has earned my hearty thanks for their patience and proficiency in preparing this new edition. MannheimjHeidelberg, March 1975 GISELA DALLENBACH-HELLWEG Foreword to the German Edition During life form changes. From the form seen we can often interpret function.