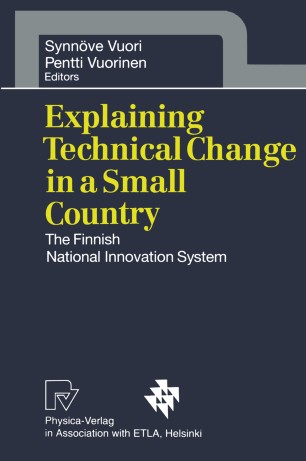 Technical change is produced by the interaction of a large number of technical, economic, social and institutional factors. One of the starting points is the concept of national innovation systems. The aim of this book is to take Finland as an example illustrating the challenges faced by small countries. The characteristics and performance of the Finnish national innovation system of the last couple of decades are analyzed. The Finnish experience is put in a broader context by comparing it with a few other countries. The development paths possible in the near future are assessed. According to the results, many problems remain despite favourable developments in several technology indicators. The rigidities of the social institutions created during the 1970s and 1980s seem to have become obstacles for economic and technological development. There are fairly large differences between the countries studied, and even between the culturally and historically close Nordic countries. However,Finland and Sweden seem to share the same kind of encompassing collective risk-sharing systems, which may have detrimental effects on, for instance, incentives related to innovativeness. Increasing globalisation requires further development of the national system of innovation. Technology policy must be seen as one part of more encompassing social and economic policies, and the role of factors such as well-functioning institutions, appropriate education and sound incentive systems is highly important. The papers of this book are written by experts of various research disciplines. They reflect the respective views on the issue how technical change in Finland can be explained. It is also discussed how Finland fares in comparison to Denmark, Sweden, Japan and the United States.