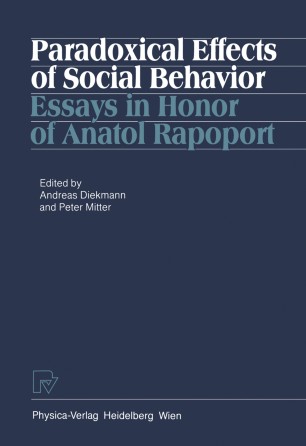 Essays in Honor of Anatol Rapoport

In the history of science "paradoxes" are not only amusing puzzles and chal­ lenges to the human mind but also driving forces of scientific development. The notion of "paradox" is intimately related to the notion of "contradiction". Logi­ cal paradoxes allow for the derivation of contradictory propositions (e.g. "Rus­ sell's set of all sets not being members of themselves" or the ancient problem with propositions like "I am lying" 1), normative paradoxes deal with contradic­ tions among equally well accepted normative postulates (Arrow's "impossibility theorem", Sen's "Impossibility of a Paretian Liberal") and "factual" paradoxes refer to conflicts between conventional opinion based on an accepted empirical theory and contradictory empirical evidence (e.g. the "St. Petersburg paradox" or the "Allais paradox" in decision theory2). Paradoxes, either logical, normative or factual, also contradict our intui­ tions. The counter-intuitive property which seems to be a common feature of all paradoxes plays an important part in the empirical social sciences, particularly in the old research tradition of scrutinizing the unintended consequences of pur­ posive actions. Expectations based on naive theories ignoring interdependencies between individual actions are very often in conflict with "surprising" empirical evidence on collective results of social behavior. Examples are numerous reach­ ing from panic situations, the individual struggle for status gains resulting in collective deprivation, the less than optimal supply of collective goods etc. to global problems of the armament race and mismanagement of common resources.