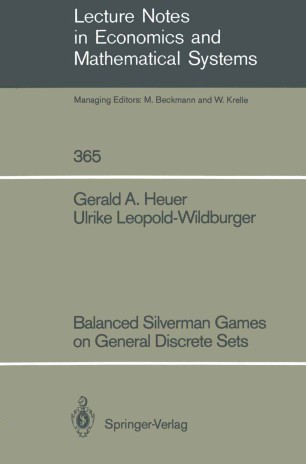 A Silverman game is a two-person zero-sum game defined in terms of two sets S I and S II of positive numbers, and two parameters, the threshold T > 1 and the penalty v > 0. Players I and II independently choose numbers from S I and S II, respectively. The higher number wins 1, unless it is at least T times as large as the other, in which case it loses v. Equal numbers tie. Such a game might be used to model various bidding or spending situations in which within some bounds the higher bidder or bigger spender wins, but loses if it is overdone. Such situations may include spending on armaments, advertising spending or sealed bids in an auction. Previous work has dealt mainly with special cases. In this work recent progress for arbitrary discrete sets S I and S II is presented. Under quite general conditions, these games reduce to finite matrix games. A large class of games are completely determined by the diagonal of the matrix, and it is shown how the great majority of these appear to have unique optimal strategies. The work is accessible to all who are familiar with basic noncooperative game theory.