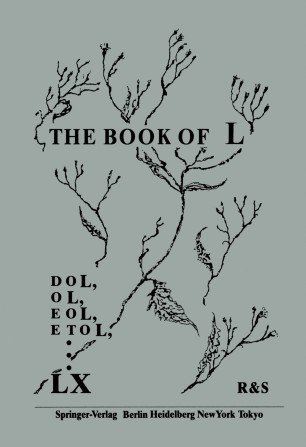 The Book of L

This book is dedicated to Aristid Lindenmayer on the occasion of his 60th birthday on November 17, 1985. Contributions range from mathematics and theoretical computer science to biology. Aristid Lindenmayer introduced language-theoretic models for developmental biology in 1968. Since then the models have been cus­ tomarily referred to as L systems. Lindenmayer's invention turned out to be one of the most beautiful examples of interdisciplinary science: work in one area (developmental biology) induces most fruitful ideas in other areas (theory of formal languages and automata, and formal power series). As evident from the articles and references in this book, the in­ terest in L systems is continuously growing. For newcomers the first contact with L systems usually happens via the most basic class of L systems, namely, DOL systems. Here "0" stands for zero context between developing cells. It has been a major typographical problem that printers are unable to distinguish between 0 (zero) and 0 (oh). Thus, DOL was almost always printed with "oh" rather than "zero", and also pronounced that way. However, this misunderstanding turned out to be very fortunate. The wrong spelling "DOL" of "DOL" could be read in the suggestive way: DO L Indeed, hundreds of researchers have followed this suggestion. Some of them appear as contributors to this book. Of the many who could not contribute, we in particular regret the absence of A. Ehrenfeucht, G. Herman and H.A. Maurer whose influence in the theory of L systems has been most significant.