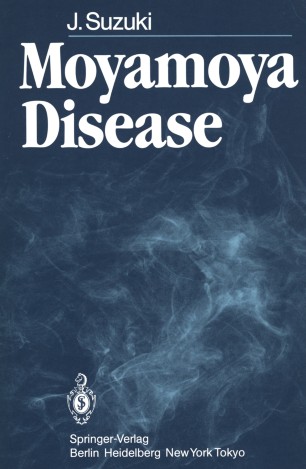 The first mention of moyamoya disease as a distinct disease entity was in a paper I published in 1965. The abnormal net­ like vessels at the base of the brain seen in cerebral angio­ grams of this disease were described by most native speakers of Japanese as "moyamoya," a Japanese expression for some­ thing hazy, such as a puff of cigarette smoke drifting in the air. In fact, prior to my advocacy of this term, this type of vascular network was often referred to as "moyamoya vessels" by Japanese researchers. In 1969, Dr. A. Takaku and I submitted a paper to the Ar­ chives of Neurology entitled "A Disease Showing Abnormal Net-like Vessels at the base of the Brain," with a subtitle of "Moyamoya Disease." The editor, however, interchanged the main title and the subtitle and brought this term "moyamoya" to fame! Since then, researchers throughout the world have been using this poetic word! For a nicknaming godfather like me, it is a special joy to have this Japanese word enter the honored ranks ofmedica1 terminology. My first publication concerning this lesion was a report discussing six cases in 1963. Therefore it is now 20 years since I first became aware of and started to study moyamoya dis­ ease. At first, I merely thought that it was a strange vascular network, unique to these first few patients, and I reported these cases as being cases of acquired collateral vessels.