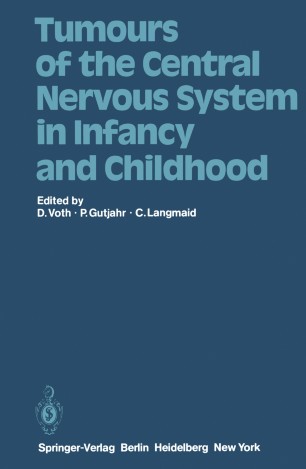 Tumours of the Central Nervous System in Infancy and Childhood

Tumours of the central nervous system in infancy and childhood show so many di­ verse pathomorphological characteristics and present so many diagnostic problems that a congress dealing specifically with the subject and thus bringing together a wide range of experts in the field seemed called for. The programme of the congress, . held in Mainz between 22 and 24 October 1981, was designed to provide compre­ hensive coverage of diagnosis and the various therapeutic procedures, as well as of basic research in the field. The various lectures given are contained in this book, which thus reflects the complete spectrum of topics discussed. The interest generated by the congress amply justified our decision to organize it. Representatives of various specialities, such as neuropathology, paediatrics, on­ cology, radiology, neurosurgery, paediatric surgery and neurology, and, last but not least, basic research, provided lively and interesting lectures which admittedly raised more problems than they solved. In addition to the actual papers presented, we attached considerable importance to the different opinions voiced during the congress, as reflected in the discussions included at the end of each chapter.