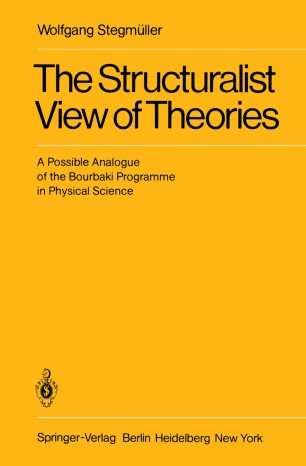 The Structuralist View of Theories

A Possible Analogue of the Bourbaki Programme in Physical Science

The present text originated with the intention of writing a brief reply to Feyerabend's detailed discussion of my book The Structure and Dynamics of Theories. For reasons explained in the Introduction this turned out to be an impossible undertaking. What resulted was a self-contained new approach to the structuralist view, combined with an attempt to bring it up to date by including a report on the latest developments. As matters stand it would have been unreasonable and unfair of me to ask the editors of The British Journal for the Philosophy of Science to publish this text which exceeds by far the size of an average essay. Thus, a separate publication seemed advisable. I am deeply indebted to Springer-Verlag for making this publication possible. Since the publication of the above-mentioned book I have learned a lot from the works, partly unpublished, of Professor Joseph D. Sneed, Professor Carlos­ Ulises Moulines, and Dr. Wolfgang Balzer. I should like to thank my co-workers Dr. Wolfgang Balzer and Dr. Matthias Varga von Kibed and my student Michael Heidelberger for many constructive, critical remarks on the first draft of the manuscript and, in addition, Dr. Balzer for collecting and orga­ nizing the material for the Formal Appendix. Last, but not least, I express my warm thanks to Mrs. Clara Seneca, Oldenburg, and Mr. Roberto Minio, Springer­ Verlag, for amending my English formulations. V Table of Contents Introduction ....................................... .