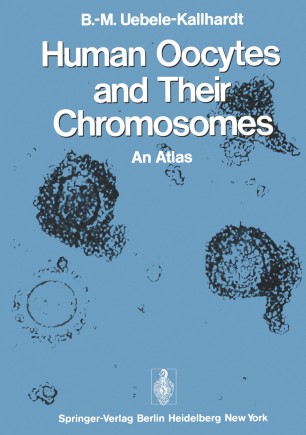 Human Oocytes and Their Chromosomes

The last decade has seen remarkable advances in human ge­ netics. Once the correct chromosome number of the human genome was ascertained, a wide variety of diseases was rec­ ognized as due to numerical chromosome anomalies. There followed the discovery that spontaneous abortions are the result of chromosome errors, and specific band patterns of chromosomes allowed identification of minute lesions. The techniques of cell hybridization now allow specific gene assign­ ment to chromosomes and even to distinct loci on their arms. All this was possible because of the ease with which metaphase chromosomes can be obtained and manipulated. The much older technique of analysis of meiotic chromosomes has taken a back seat in this exciting era. Being much less readily accessi­ ble, spermatogonial analysis is much less frequently under­ taken and is less successful. Even more difficult for study is the female meiotic process. Not only is meiosis extraordinar­ ily long, spanning from before birth to ovulation, the tech­ niques for its study and the patience required for detailed inquiry have been significant obstacles. At the same time, the suspicion that female meiotic analysis should not only be rewarding but that it may be mandatory has been with us ever since it was recognized that a positive correlation exists between chromosomal nondisjunction and maternal age. Before the intricacies of chromosomal behavior that are re­ sponsible for nondisjunction are understood, however, it is necessary that we comprehend the normalcy of the process.