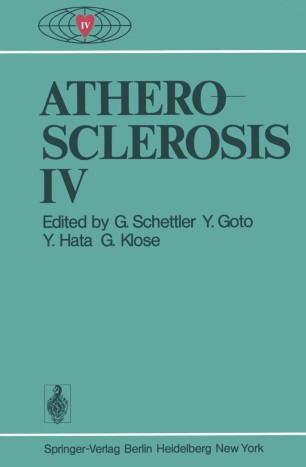 Proceedings of the Fourth International Symposium

The presence of monotypism in thick atherosclerotic lesions of black females with G-6-PD mosaicism first reported by the Benditts (1973) has been confirmed in two other laboratories. However, we believe that it is premature to conclude that the finding of monotypism necessarily indicates monoclonal origin of athero­ sclerotic lesions. We have suggested two alternative explanations for the obser­ vation of monotypism which we believe must be shown to be invalid before accept­ ing monoclonal origin as the only plausible way to account for the observed G-6-PD monotypism. One of these two alternatives relates to clonal heterogeneity of cell growth potential, i. e. , during the course of progressive growth of a le­ sion, progeny of one cell may overgrow all others in a portion of the lesion. The other alternative is that one of the G-6-PD alleles may be linked to genes that afford a preferential survival characteristic in the abnormal environment present in atheroscerotic lesions. Thus, cells with one allele may be able to grow better than cells with the other allele, and this characteristic may be unrelated to "A-ness" or "B-ness". We have studied initiation of lesions in He diet-fed swine and demonstrated that all active lesions that were studied were of multiple cell origin (not monoclo­ nal). We have studied cell growth patterns in developing atherosclerotic lesions in He diet-fed swine and found evidence consistent with clonal heterogeneity in growth potential of lesion cells.