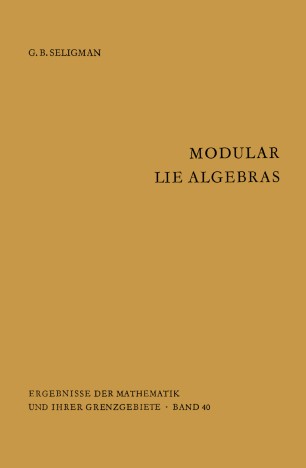 The study of the structure of Lie algebras over arbitrary fields is now a little more than thirty years old. The first papers, to my know­ ledge, which undertook this study as an end in itself were those of JACOBSON (" Rational methods in the theory of Lie algebras ") in the Annals, and of LANDHERR ("Uber einfache Liesche Ringe") in the Hamburg Abhandlungen, both in 1935. Over fields of characteristic zero, these thirty years have seen the ideas and results inherited from LIE, KILLING, E. CARTAN and WEYL developed and given new depth, meaning and elegance by many contributors. Much of this work is presented in [47, 64, 128 and 234] of the bibliography. For those who find the rationalization for the study of Lie algebras in their connections with Lie groups, satisfying counterparts to these connections have been found over general non-modular fields, with the substitution of the formal groups of BOCHNER [40] (see also DIEUDONNE [108]), or that of the algebraic linear groups of CHEVALLEY [71], for the usual Lie group. In particular, the relation with algebraic linear groups has stimulated the study of Lie algebras of linear transformations. When one admits to consideration Lie algebras over a base field of positive characteristic (such are the algebras to which the title of this monograph refers), he encounters a new and initially confusing scene.