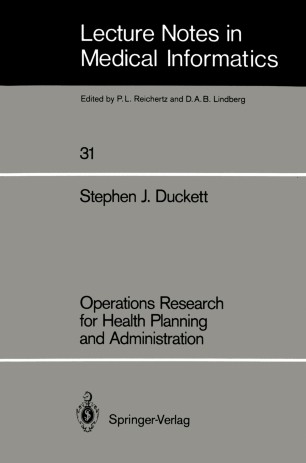 Operations research aims to assist managers faced with problems of coordinating activities; improving the quality of care of services delivered; making optimal resource allocation decisions and generally, managing services and institutions. Operations research (or O.R.) was originally developed in response to the problems of the second World War. It was characterised then by a unifying and clear objective; clear problems that had to be solved and the use of inter-disciplinary teams to analyse and solve identified problems. This analysis often drew on mathematical techniques. After the war, operations research moved in two separate but related directions. In England, the emphasis on inter-disciplinary approaches and problem solving teams remained. The operations researcher still used mathematical techniques but these were not systematised into a volume of standard formulae. The emphasis of operations research was on the approach not the tools used (see, for example, Luckman & Stringer, 1974; also Luck, Luckman, Smith & Stringer 1971; and McLachlan, 1975). In the United States, the emphasis was placed on the use of mathematical techniques. Operations research became a mathematically based science relying on standardised models (e. g. queuing, allocation) and formulae. This approach was facilitated by the availability of computers.