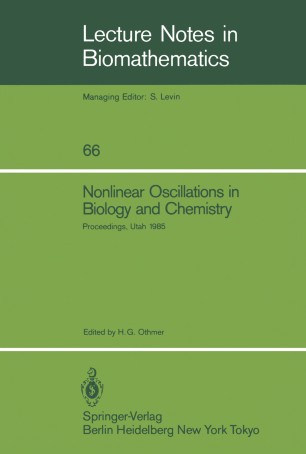 Nonlinear Oscillations in Biology and Chemistry

This volume contains the proceedings of a meeting entitled 'Nonlinear Oscillations in Biology and Chemistry', which was held at the University of Utah May 9-11,1985. The papers fall into four major categories: (i) those that deal with biological problems, particularly problems arising in cell biology, (ii) those that deal with chemical systems, (iii) those that treat problems which arise in neurophysiology, and (iv), those whose primary emphasis is on more general models and the mathematical techniques involved in their analysis. Except for the paper by Auchmuty, all are based on talks given at the meeting. The diversity of papers gives some indication of the scope of the meeting, but the printed word conveys neither the degree of interaction between the participants nor the intellectual sparks generated by that interaction. The meeting was made possible by the financial support of the Department of Mathe­ matics of the University of Utah. I am indebted to Ms. Toni Bunker of the Department of Mathematics for her very able assistance on all manner of details associated with the organization of the meeting. Finally, a word of thanks to all participants for their con­ tributions to the success of the meeting, and to the contributors to this volume for their efforts in preparing their manuscripts.