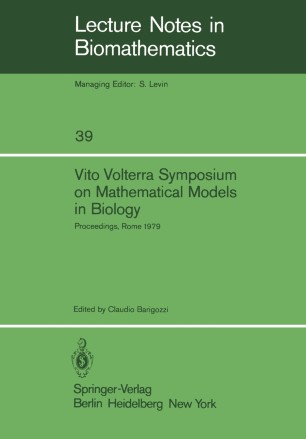 The idea of organizing a symposium on mathematical models in biology came to some colleagues, members of the Accademia dei Lincei, in order to point out the importance of mathematics not only for supplying instruments for the elaboration and the evaluation of experimental data, but also for discussing the possibility of developing mathematical formulations of biological problems. This appeared particularly appropriate for genetics, where mathematical models have been of historical importance. When the organizing work had started, it became clear to us that the classic studies of Vito Volterra (who was also a Member of the Academy and its President from 1923 to 1926) might be con­ sidered a further reason to have the meeting in Rome at the Accademia dei Lincei; thus the meeting is dedicated to his memory. Biology, in its manifold aspects proved to Se ~ difficult object for an exhaustive approach; thus it became necessary for practical reasons to make a choice of problems. Therefore not all branches of biology have been represented. The proceedings of the symposium, as a whole, assume a knowledge of mathematics on the part of the reader; however the problem of teaching mathematics to biologists was the subject of a round table discussion, not recorded in these proceedings. On this were brought up some basic points to be recommended to teachers on an international basis, and a statement was prepared for circulation. The Organizing Committee TABLE OF CONTENTS TOPIC I MODELS OF NATUPAL SELECTION . . . . . . . • . . . .