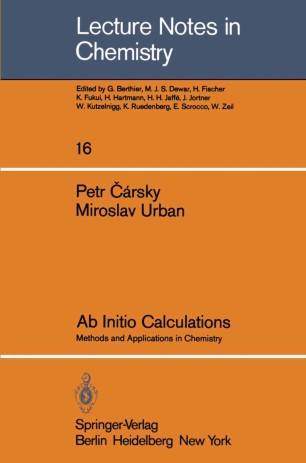 Methods and Applications in Chemistry

Until recently quantum chemical ab initio calculations were re­ stricted to atoms and very small molecules. As late as in 1960 Allen l and Karo stated : "Almost all of our ab initio experience derives from diatomic LCAO calculations ••• N and we have found in the litera­ ture "approximately eighty calculations, three-fourths of which are for diatomic molecules ••• There are approximately twenty ab initio calculations for molecules with more than two atoms, but there is a decided dividing line between the existing diatomic and polyatomic wave functions. Confidence in the satisfactory evaluation of the many­ -center two-electron integrals is very much less than for the diatom­ ic case". Among the noted twenty calculations, SiH was the largest 4 molecule treated. In most cases a minimal basis set was used and the many-center two-electron integrals were calculated in an approximate way. Under these circumstances the ab initio calculations could hard­ ly provide useful chemical information. It is therefore no wonder that the dominating role in the field of chemical applications was played by semiempirical and empirical methods. The situation changed essentially in the next decade. The problem of many-center integrals was solved, efficient and sophisticated computer programs were devel­ oped, basis sets suitable for a given type of problem were suggested, and, meanwhile, a considerable amount of results has been accumulated which serve as a valuable comparative material. The progress was of course inseparable from the development and availability of computers.