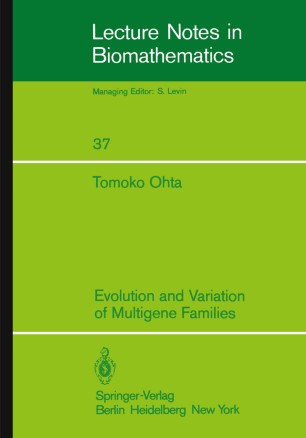 Evolution and Variation of Multigene Families

During the last decade and a half, studies of evolution and variation have been revolutionized by the introduction of the methods and concepts of molecular genetics. We can now construct reliable phylogenetic trees, even when fossil records are missing, by compara­ tive studies of protein or mRNA sequences. If, in addition, paleon­ tological information is available, we can estimate the rate at which genes are substituted in the species in the course of evolution. Through the application of electrophoretic methods, it has become possible to study intraspecific variation in molecular terms. We now know that an immense genetic variability exists in a sexually repro­ ducing species, and our human species is no exception. The mathematical theory of population genetics (particularly its stochastic aspects) in conjunction with these new developments led us to formulate the "neutral theory" of molecular evolution, pointing out that chance, in the form of random gene frequency drift, is playing a much more important role than previously supposed. I believe that the traditional paradigm of neo-Darwinism needs drastic revision. Also, the importance of gene duplication in evolution, as first glimpsed by early Drosophila workers, has now been demonstrated by directly probing into genetic material. Recently, it has been discovered that some genes exist in large-scale repetitive structures, and that they are accompanied by newly described phenomena such as "coincidental evolution". Working out the population genetical consequences of multigene families is a fascinating subject, for which Dr. Ohta has been largely responsible.