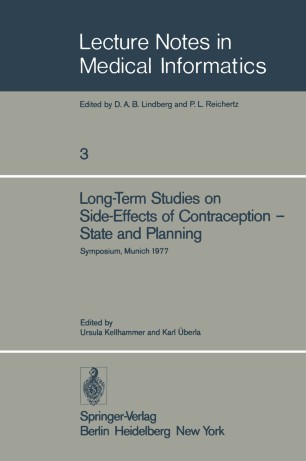 Long-Term Studies on Side-Effects of Contraception — State and Planning

Conference reports of scientific meetings do not automatically justi­ fy publication. Our decision to publish the Proceedings of this Sym­ posium was based on a number of reasons. The subject of more or less grave adverse side-effects of oral contra­ ception is of major importance for all women. If the research insti­ tutions of Gynecology make fundamental mistakes in this subject, then the trust in them will diminish substantially. National institutions will have to shoulder a part of that burden, too, if they do not suc­ ceed in timely prevention of grave and widespread health risks and damages. Adverse side-effects of oral contraception become only apparent in later life and probably only after a latent interval of at least 10 years. The German female population will be fully exposed to that situation during the next decade. Up to now about 40 % of the women aged 35 years or older have no experience with the pill. Ten years later nearly all of them shall have used the pill for a short period at least. If serious long-term side-effects exist, we have to build up our research strategy now to detect these health hazards in time. Large-scale studies cannot be generated just out of nothing, the development and review of ideas in a pilot phase is necessary. The pilot phase of a German long-term study began three years ago. We shall report our experiences of that pilot phase, because this might be of value for other projects of this kind.