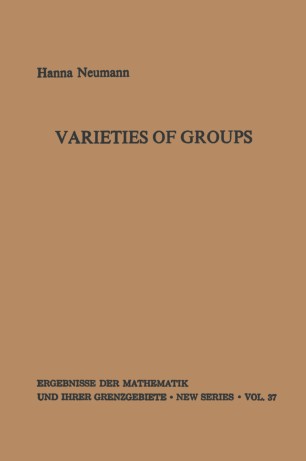 Varieties of algebras are equationally defined classes of algebras, or "primitive classes" in MAL'CEV'S terminology. They made their first explicit appearance in the 1930's, in Garrett BIRKHOFF'S paper on "The structure of abstract algebras" and B. H. NEUMANN'S paper "Identical relations in groups I". For quite some time after this, there is little published evidence that the subject remained alive. In fact, however, as part of "universal algebra", it aroused great interest amongst those who had access, directly or indirectly, to PHILIP HALL'S lectures given at Cambridge late in the 1940's. More recently, category theory has provided a general setting since varieties, suitably interpreted, are very special examples of categories. Whether their relevance to category theory goes beyond this, I do not know. And I doubt that the category theoretical approach to varieties will be more than a fringe benefit to group theory. Whether or not my doubts have substance, the present volume owes its existence not to the fact that varieties fit into a vastly more general pattern, but to the benefit group theory has derived from the classification of groups by varietal properties. It is this aspect of the study of varieties that seems to have caused its reappearance in the literature in the 1950's.