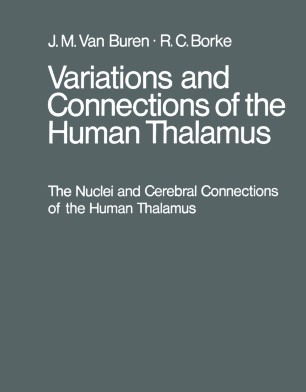 Variations and Connections of the Human Thalamus

In the past half century since the Vogts stimulated investigations on the anatomi­ cal relationships between cortex and subcortical structures, a voluminous literature has developed on the thalamus. Although much of this writing has been based upon studies of sub-human primates and carnivora, the prime goal of most investi­ gators has been to elucidate clinical experience. And indeed, these researches have enlightened the neurologist. From the beginning of anatomical studies of the thalamus, anatomists have sought a meaningful parcellation of the thalamus on the basis of both topography and cellular morphology. However, as the internal organization of the thalamus changes greatly in phylogeny, a topographical designation of thalamic divisions in different species loses its significance. Hence, the detailed descriptions of the nuclear configuration of carnivora, which appeared from the laboratories of Huber and Crosby, could not be readily applied to the thalamus of monkey or man. This has led to the introduction of different and more or less specific terminologies for each species rendering attempts at homologies difficult, if not impossible. Recogniz­ ing the changes in conceptualization of the thalamus and the advances in neuro­ anatomical knowledge, Dr. Van Buren has tackled the formidable tasks of bringing the thalamic nomenclature up to date. He has based his parcellation of the thala­ mus upon the histological morphology of the neuronal components, which are modified, to some extent at least, by the fiber tracts traversing the area.