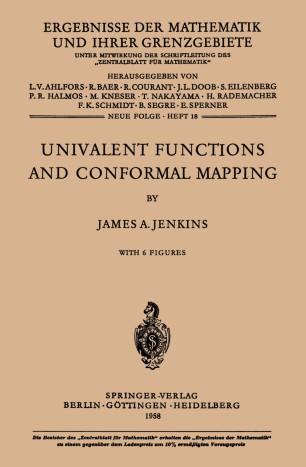 This monograph deals with the application of the method of the extremal metric to the theory of univalent functions. Apart from an introductory chapter in which a brief survey of the development of this theory is given there is therefore no attempt to follow up other methods of treatment. Nevertheless such is the power of the present method that it is possible to include the great majority of known results on univalent functions. It should be mentioned also that the discussion of the method of the extremal metric is directed toward its application to univalent functions, there being no space to present its numerous other applications, particularly to questions of quasiconformal mapping. Also it should be said that there has been no attempt to provide an exhaustive biblio­ graphy, reference normally being confined to those sources actually quoted in the text. The central theme of our work is the General Coefficient Theorem which contains as special cases a great many of the known results on univalent functions. In a final chapter we give also a number of appli­ cations of the method of symmetrization. At the time of writing of this monograph the author has been re­ ceiving support from the National Science Foundation for which he wishes to express his gratitude. His thanks are due also to Sister BARBARA ANN Foos for the use of notes taken at the author's lectures in Geo­ metric Function Theory at the University of Notre Dame in 1955-1956.