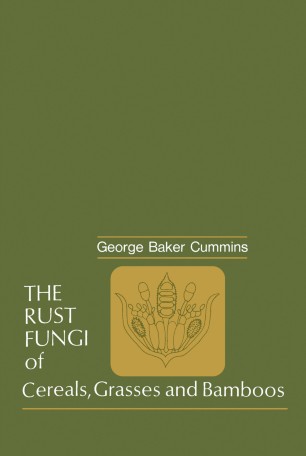 The Rust Fungi of Cereals, Grasses and Bamboos

In the preparation of this descriptive manual of the rust fungi of the grasses of the world the principal goal was to produce a system by which these important pathogens might be recognized on the basis of their morophology, without dependence on the identity of the host plant. This is an Utopian goal and, being Utopian, has doubtless not been attained. But it is better to have tried and partially failed than not to have tried at all. The first attempt to revise the classification on a new basis utilized the rust fungi of the tribe Andropogoneae. A "Group System" was initiated (Uredineana 4:5-89. 1953) based on the uredinial stage. The attempt was satisfactory at the time, but was not adaptable when all grass rust fungi were considered. Consequently, an expanded system was employed when I attempted a summarization of all grass rust fungi. The expanded scheme (Plant Disease Reporter Supplement 237:1-52. 1956) of 9 Groups proved to be a most helpful organizational system and is used here (see explanations, p. Xi) in Puccinia, Uromyces, and Uredo. The system is useful and does aggregate generally similar species, rather than segregating them as in a host-based arrangement. The characters used, i.e. presence or absence of paraphyses, arrangement of germ pores, and echinulate or verrucose spore surface, are subject to minimal intergradations.