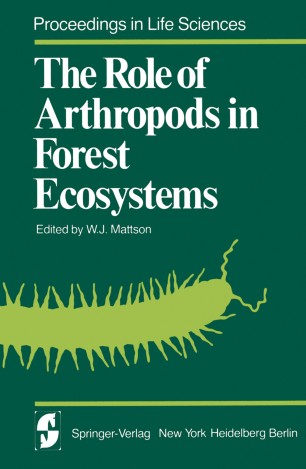 The Role of Arthropods in Forest Ecosystems

The role of arthropods in forest ecosystems is poorly understood. Yet such knowledge may be critical in order to explain fully the fundamental forces that shape the structure and regulate the functioning of such ecosys­ tems. There are numerous hypotheses about the roles of various arthropods, but few, if any, of these hypotheses have been rigorously tested. Some, however, have been repeated so often and so widely that they are now accept­ ed by many as unequivocal fact. Nothing could be further from the truth. Forest arthropods which derive most of their sustenance from plants are usually specially adapted for feeding in one of three subsystems-the above-ground plant system, the soil-litter system, or the aquatic stream system. Plant-feeding arthropods in the soil-litter and stream systems are primarily saprophous although many consume significant amounts of microorganisms. Research on the role of arthropods in each of these three subsystems has historically been provincial. Until very recently there has been little effort to collate, assimilate, and syn­ thesize the plethora of findings in even one of these systems-rnuch less all three. This Symposium (at the 15th International Congress of Entomology, Washington, D.C. August 19-27, 1976) was organized for the specific pur­ pose of promoting scientific synthesis. It fulfills one of the first requirements in such endeavors; namely, the juxtapositioning of current knowledge and hypotheses so that similarities can be perceived, insights can be de­ rived, and more elaborate conceptual constructs can be built.