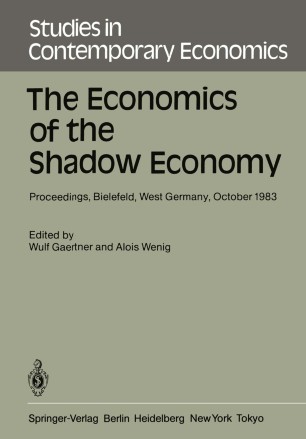 The Economics of the Shadow Economy

Proceedings of the International Conference on the Economics of the Shadow Economy, Held at the University of Bielefeld, West Germany, October 10–14, 1983

Robbery, larceny, blackmail, fraud, and other crimes with economic motives are likely to be as old as mankind, and the evasion of taxes and economic regulations can be assumed to begin with the introduction of taxes and economic regulations. Thus the shadow economy is certain­ ly not a new phenomenon. However, economists did not pay much attention to it until quite recently. P. GUTMANN in his pioneering article "The Subterranean Economy" (Financial Analysts Journal, Nov/Dec 1977, p. 24- 27) was first to point out that unreported economic activity cannot (or, at least, can no longer) be considered as a "quantite negligeable". Challenged by GUTMANN's hypothesis many economists have then tried to assess the quantitative and qualitative importance of the shadow economy (commonly also known as the underground, or subterranean, or black, or unreported economy, and by other names). There seems to be wide agreement nowadays that the shadow economy has not only reached a substantial portion of total economic activity in both Eastern and Western countries but that it is also growing at rates which can no longer be experienced in the official sector. The existence of a considerable volume of unreported economic activities implies that important macroeconomic variables are biased in the official statistics. The rate of unemployment, for example, may be over-estimated while production figures, on the other hand, tend to be underrated. The government could thus be mislead and choose inadequate policies.