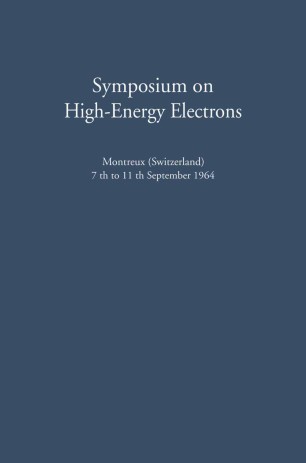 Owing to the tremendously rapid development of the sciences publi­ cations of congresses and meetings are frequently out-of-date by the time they appear in print. We endeavoured to publish the report of the Sym­ posium in Montreux in as short a time as possible. In order to reduce the cost, the manuscripts hat to be confined to few pages at the most and it was absolutely necessary to limit the number of illustrations. For the Symposium in question we invited all those authors of whom we knew they were acquainted with the medicinal application of fast elec­ trons to take part in a discussion covering their particular field of interest. Other lectures were also admitted without exception. Unfortunately on account of various extrinsic reasons the time between the application to take part in the Symposium and the Meeting itself was far too short which fact prevented some well-known scientists from coming to Montreux. In cases where no speaker was to be found for a certain subject Bernese and Milano Institutes (Doc. Dr. med. P. L. CaVA) filled the gap whenever and wherever possible.