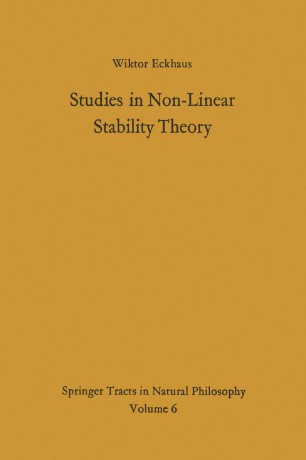 Non-linear stability problems formulated in terms of non-linear partial differential equations have only recently begun to attract attention and it will probably take some time before our understanding of those problems reaches some degree of maturity. The passage from the more classical linear analysis to a non-linear analysis increases the mathematical complexity of the stability theory to a point where it may become discouraging, while some of the more usual mathematical methods lose their applicability. Although considerable progress has been made in recent years, notably in the field of fluid mechanics, much still remains to be done before a more permanent outline of the subject can be established. I have not tried to present in this monograph an account of what has been accomplished, since the rapidly changing features of the field make the periodical literature a more appropriate place for such a review. The aim of this book is to present one particular line of research, originally developed in a series of papers published in 'Journal de Mecanique' 1962-1963, in which I attempted to construct a mathematical theory for certain classes of non-linear stability problems, and to gain some understanding of the non-linear phenomena which are involved. The opportunity to collect the material in this volume has permitted a more coherent presentation, while various points of the analysis have been developed in greater detaiL I hope that a more unified form of the theory has thus been achieved.