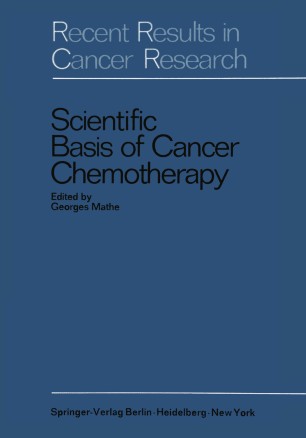 The European Organization for Research into Cancer Treatment (OERTC), founded in 1962 initially under the name Groupe Europeen de Chimiotherapie Anti­ cancereuse (GECA), is an extramural European Institute for collecting, co-ordinating and encouraging the work of scientists researching into cancer treatment at 16 European institutes: 3 in W. Germany, 2 in Italy, 2 in Belgium, 3 in the Netherlands, 2 in the United Kingdom, 1 in Switzerland and 3 in France. The first President of OERTC was Professor GEORGES MATHE, now succeeded by Professor SILVIO GARATTINI of Milan. The organization has a Board of 20 Directors, responsible for co-ordinating the entire range of activities and guiding research and experimental studies on animals, also the first human trials of new therapeutic agents which have been fully tested on animals. The Co-operating Groups carry out com­ plementary testing involving large numbers of patients. Thus, OER TC is not a "learned society" but an agency for co-ordinating work. OER TC's annual plenary meeting for 1968 was held in Paris on 22nd and 23rd March. It was given over to an intensive study of the scientific basis of chemotherapy in the treatment of cancer in man. These two working sessions brought together members of all groups, both directing and co-operating. The first day was in effect a teaching seminar, open to all practitioners wishing to use chemotherapy in cancer, and explaining the scientific basis of such treatment. This seminar constitutes the present monograph.