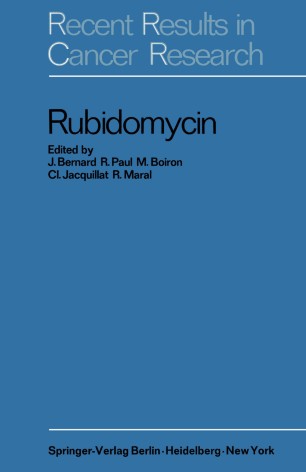 A New Agent against Cancer

Trials in the treatment of the leukemias are sometimes based on a hypothesis, as in the case of exchange transfusion [33] or the use of antimetabolites [86]. Or they are conducted empirically as the results of chance observations, as in the case of the use of the nitrogen mustards, urethane, and the Vinca alkaloids. Or they lie between the two, aiming at making use of well established biological facts: examples are the use of ACTH, cortisone and, more recently, the antibiotics. What is true for bacteria may also perhaps be true, if not for elephants, at least for the malignant cells of mammals. It was this idea that lay behind the first attempts at treating cancer and leukemia with antibiotics. The results obtained by the use of certain substances extracted from micro-organisms (actinomycin, azaserine, mito­ mycin, rufocromomycin), although encouraging at times, were inconsistent. The action of rubidomycin appears to cover a wider spectrum and to be more consistent and more effective. As in the case of Homer and Christopher Columbus, the honor of having given birth to rubidomycin is claimed by more than one country and town. In fact, the same product was discovered in the same year, though quite independently, by a group of French workers [184] who described it under the name of rubidomycin, and by a group of Italian workers [87] who studied it under the name of daunomycin.