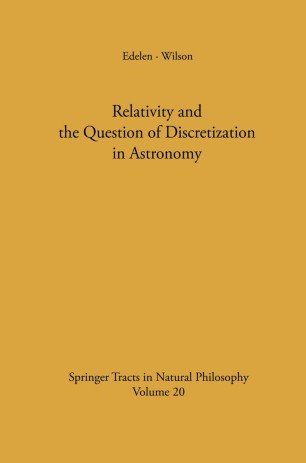 Relativity and the Question of Discretization in Astronomy

Theoretical researches in general relativity and observational data from galactic astronomy combine in this volume in contributions to one of the oldest questions of natural philosophy: Is the structure of the physical world more adequately described by a continuous or a discrete mode of representation? Since the days of the Pythagoreans, this question has surfaced from time to time in various guises in science as well as in philosophy. One of the most bitterly contested and illuminating controversies between the continuous and the discrete viewpoints is to be found in the wave versus corpuscular description of optical phenom­ enae. This controversy was not resolved to the satisfaction of most of its protaganists until the development of the quantum theory. However, several obscurities that still becloud the question suggest that some deeper formulation may be necessary before more satisfactory answers can be given 1. The firm establishment of the validity of quantized structure and discrete energy distributions on the atomic scale following the ideas of Max Planck, together with the apparent absence of quan­ tization effect in astronomical and cosmic structures leaves uncertainties concerning the role played by the scale of the observer in perceiving or not perceiving discrete distributions. Some of the metaphysical inter­ pretations and implications of the quantum mechanics that have been made in recent years 2 would be subject to revision if the existence of discretized descriptions were to be established in astronomical and cosmic structures.