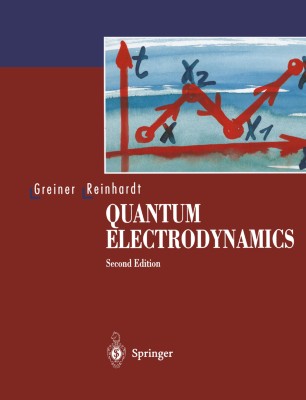 The need for a second edition of our text on Quantum Electrodynamics has given us the opportunity to implement some corrections and amendments. We have corrected a number of misprints and minor errors and have supplied additional explanatory remarks at various places. Furthermore some new material has been included on the magnetic moment of the muon (in Example 5. 6) and on the Lamb shift (in Example 5. 8). Finally, we have added the new Example 3. 17 which explains the equivalent photon method. We thank several colleagues for helpful comments and also are grateful to Dr. R. Mattiello who has supervised the preparation of the second edition of the book. Furthermore we acknowledge the agreeable collaboration with Dr. H. J. K6lsch and his team at Springer-Verlag, Heidelberg. Frankfurt am Main, Walter Greiner July 1994 Joachim Reinhardt Preface to the First Edition Theoretical physics has become a many-faceted science. For the young student it is difficult enough to cope with the overwhelming amount of new scientific material that has to be learned, let alone obtain an overview of the entire field, which ranges from mechanics through electrodynamics, quantum mechanics, field theory, nuclear and heavy-ion science, statistical mechanics, thermodynamics, and solid­ state theory to elementary-particle physics. And this knowledge should be acquired in just 8-10 semesters, during which, in addition, a Diploma or Master's thesis has to be worked on or examinations prepared for.