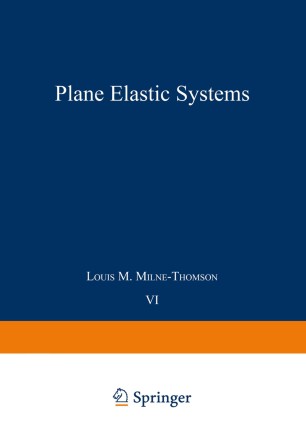 In an epoch-making paper entitled "On an approximate solution for the bending of a beam of rectangular cross-section under any system of load with special reference to points of concentrated or discontinuous loading", received by the Royal Society on June 12, 1902, L. N. G. FlLON introduced the notion of what was subsequently called by LovE "general­ ized plane stress". In the same paper FlLO~ also gave the fundamental equations which express the displacement (u, v) in terms of the complex variable. The three basic equations of the theory of KoLOsov (1909) which was subsequently developed and improved by MUSKHELISHVILI (1915 and onwards) can be derived directly from Filon's equations. The derivation is indicated by FlLO)!E~KO-BoRODICH. Although FILO)! proceeded at once to the real variable, historically he is the founder of the modern theory of the application of the complex variable to plane elastic problems. The method was developed independently by A. C. STEVEXSOX in a paper received by the Royal Society in 1940 but which was not published, for security reasons, until 1945.