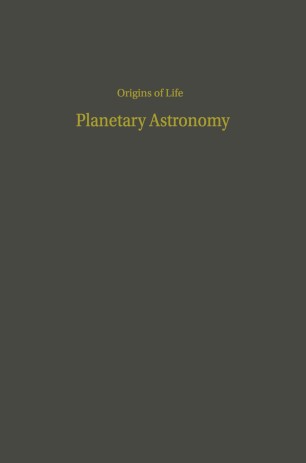 Proceedings of the Third Conference on Origins of Life

This is an edited record of the dialogue of eminent scientists attending the third conference in the series on the Origins of Life, supported by a grant from the Biosciences Program of the National Aeronautics and Space Ad­ ministration. The first conference at Princeton, 1967, was held under the direction of Dr. Frank Fremont-Smith at the time when the Interdisciplinary Communications Program (ICP) was associated with the New York Academy of Sciences. was integrated into the Office of the Assistant Secretary for In 1968, ICP Science of the Smithsonian Institution, and the entire operation was set up in Washington, D.C. The second conference, also in Princeton, was held in 1968. (See Margulis, ed. 1970 and 1971 for previously published proceed­ ings.) The third conference was held at Santa Ynez, California, Feb. 27 - March I, 1970. The proceedings are recorded and edited by the Interdisciplinary Communi­ cations Associates, Inc. (lCA, a nonprofit foundation), for ICP. Dr. Lynn Margulis, the Scientific Editor of the series, has been assisted by Barbara Miranda. Harriet Eklund is the ICP Staff Editor. ICA was formed to encourage effective interchange and interaction among the various scientific and social disciplines and to aid in the solutions of scien­ tific and social problems. Currently its primary concern is with assisting ICP. M. C. Shelesnyak, Ph.D. Director, Interdisciplinary Communications Program Smithsonian Institution Washington, D.C.