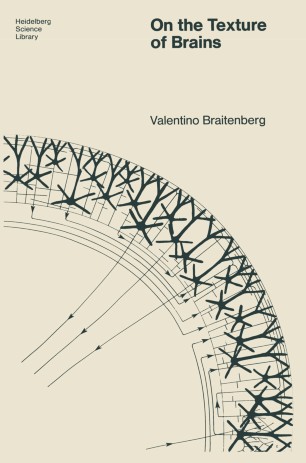 On the Texture of Brains

An Introduction to Neuroanatomy for the Cybernetically Minded

I believe that the most intriguing thing in the world, be­ sides the world itself, is the human brain. Moreover, I am sure that a coherent natural philosophy will only be possible once we have understood how the brain, itself an object of physics, generates the description of the physical word. Therefore a book on the brain, be it the fly's or the mouse's brain, needs no justification. It is important, however, to point out the limits of its ambi­ tions. The first three Chapters are introductory and are written in a lighthearted philosophical vein. An idea is introduced that turns up repeatedly in the rest of the book, namely, that the structure of brains is information about the world. Chapter 4 is didactic: in it the neuron and its function are sketched as the element of the nerv­ ous tissue. Chapters 5 to 8 are a collection of essays loosely tied together mainly by the vagaries of my own interests. They do not intend to be definitive statements about the cerebellum, the cerebral cortex, or the visual ganglia of insects but rather illuminate these structures from a personal point of view. Accordingly, many au­ thors will find their own contributions only insufficiently represented in the text and frequently without explicit quotation. I beg their pardon and remind the reader that enough competent reviews are available in the fields that I touch upon, easily accessible through the references.