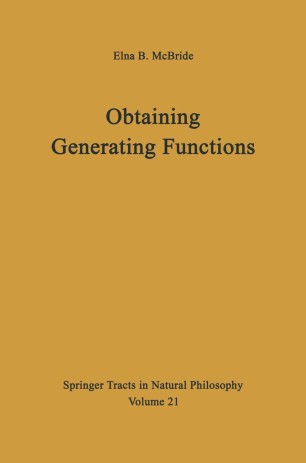 This book is an introduction to the study of methods of obtaining generating functions. It is an expository work at the level of the beginning graduate student. The first part of Chapter I gives the reader the necessary definitions and basic concepts. The fundamental method of direct summation is explained and illustrated. The second part of Chapter I deals with the methods developed by Rainville. These methods are based principally on inventive manipulation of power series. Weisner's group-theoretic method is explained in detail in Chapter II and is further illustrated in Chapter III. When this method is applicable, it yields a set of at least three generating functions. In Chapter II for the Laguerre polynomials six generating functions were found. Truesdell's method is studied in Chapter IV. For a given set of functions {fez, an the success of this method depends on the existence of certain transformations. If fez, a) can be transformed into F(z, a) such that a a-; F(z, a)=F(z, a+ 1), or if fez, a) can be transformed into G(z, a) such that a a-; G(z, a)=G(z, a-I), then from each transformed function a generating function can be obtained. Truesdell's method for obtaining the transformed functions does not require any ingenuity on the user's part. Truesdell has shown how these simple results may be exploited to generate more complicated results by means of specified, systematic, and general processes. His method of obtaining generating functions is only one of these results.