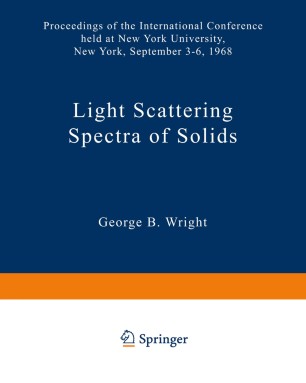 The International Conference on Light Scattering Spectra of Solids was held at New York University on September 3, 4, 5, 6, 1968. The Conference received financial support from the U. S. Army Research Office (Durham), The New York State Science and Technology Foundation, the U. S. Office of Naval Research, and The Graduate School of Arts and Sciences of New York University. Co-sponsoring the Conference was the International Union of Pure and Applied Physics. The initial conception for the Light Scattering Conference arose from informal discussions held by Professor Eli Burstein, Professor Marvin Silver (representing the U. S. Army Research Office) and Professor Joseph Birman, late in 1966. In early discussions a format was put forth for a meeting to be held the following year, re­ viewing the state of the art, and emphasizing novel developments which had 9ccurred since the 1965 International Colloquium on Scattering Spectra of Crystals held in Paris (proceedings published in Le Journal de Physique, Volume 26, November 1965).