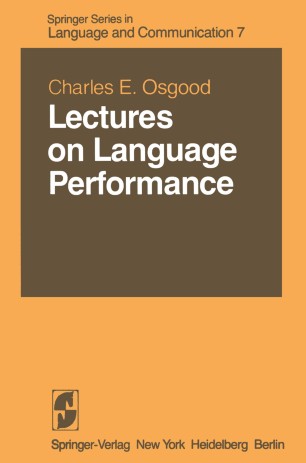 Part of the Springer Series in Language and Communication book series (SSLAN, volume 7)

Titling this book Lectures on Language Performance was not done to be cleverly "eye-catching"-the title is quite literally appropriate. With minor adaptations for a general reading audience, the eight chapters in this volume are the actual lectures I gave as the Linguistic Society of America Professor for its Summer Institute held at the University of Illinois in 1978. The eight lectures are an "anticipation" of my magnum opus-I guess when one has passed into his sixties he can be forgiven for saying this!­ a much larger volume (or volumes) to be titled Toward an Abstract Performance Grammar. The book in your hands is an anticipation of this work in at least three senses: for one thing, it doesn't pretend to cover the burgeoning literature relevant to the comparatively new field of psycholinguistics (my study at home is literally overflowing with reference materials, aU coded for various sections of the planned vol­ ume(s»; for another, both the style and the content of these Lectures were tailored to a very broad social science audience -including students and teachers in anthropology, linguistics, philosophy and psychology (as well as in various applied fields like second language learning and bilingualism); and for yet another thing, many sections of the planned magnum opus are hardly even touched on here-for example, these lectures do not "anticipate" major sections to be devoted to Efficiency vs.