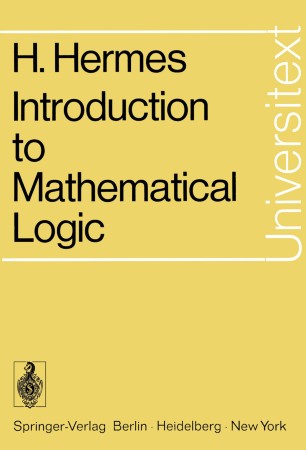 This book grew out of lectures. It is intended as an introduction to classical two-valued predicate logic. The restriction to classical logic is not meant to imply that this logic is intrinsically better than other, non-classical logics; however, classical logic is a good introduction to logic because of its simplicity, and a good basis for applications because it is the foundation of classical mathematics, and thus of the exact sciences which are based on it. The book is meant primarily for mathematics students who are already acquainted with some of the fundamental concepts of mathematics, such as that of a group. It should help the reader to see for himself the advantages of a formalisation. The step from the everyday language to a formalised language, which usually creates difficulties, is dis­ cussed and practised thoroughly. The analysis of the way in which basic mathematical structures are approached in mathematics leads in a natural way to the semantic notion of consequence. One of the substantial achievements of modern logic has been to show that the notion of consequence can be replaced by a provably equivalent notion of derivability which is defined by means of a calculus. Today we know of many calculi which have this property.