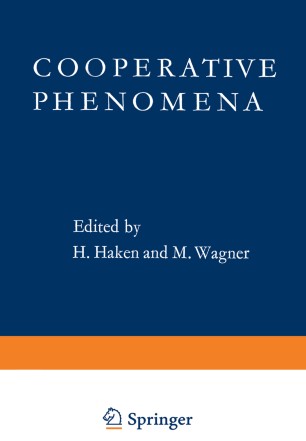 The study of cooperative phenomena is one of the dominant features of contem­ porary physics. Outside physics it has grown to a huge field of interdisciplinary investigation, involving all the natural sciences from physics via biology to socio­ logy. Yet, during the first few decades following the advent of quantum theory, the pursuit of the single particle or the single atom, as the case may be, has been so fascinating that only a small number of physicists have stressed the importance of collective behaviour. One outstanding personality among these few is Professor HERBERT FROHLICH. He has made an enormous contribution to the modern concept of cooperativity and has stimulated a whole generation of physicists. Therefore, it seemed to the editors very appropriate to dedicate a volume on "cooperative phenomena" to him on the occasion of his official retirement from his university duties. Nevertheless, in the course of carrying out this project, the editors have been somewhat amazed to find that they have covered the essentials of contemporary physics and its im­ pact on other scientific disciplines. It thus becomes clear how much HERBERT FROHLICH has inspired research workers and has acted as a stimulating discussion partner for others. FROHLICH is one of those exceptional scientists who have wor­ ked in quite different fields and given them an enormous impetus. Unfortunately, the number of scientists of such distinctive personality has been decreasing in our century.