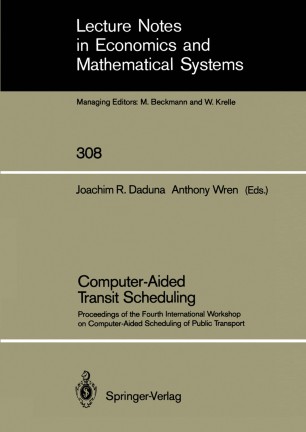 This volume consists of papers presented at the Fourth International Workshop on Computer-Aided Scheduling of Public Transport, which was held in Hamburg from 28th to 31st July 1987. The first of this series of Workshops was held in Chicago in 1975. Papers presented then tended to look forward to what might be done in the future application of computers to problems in transit scheduling. No presentations described systems which had been implemented and were being used on a regular basis, although a few papers discussed apparently successful once-off applications in both bus scheduling and bus crew scheduling (or run-cutting). However, within a few months of the end of that first workshop some systems had been implemented, both in Europe and in North America. By the time of the second Workshop, in Leeds in 1980, several systems were in regular use. Most of the crew scheduling implementations were based on heuristic methods (e.g., RUCUS), although mathematically based methods were being used in Quebec City and in Hamburg, and several papers described further mathematical methods in the course of development. A wide variety of bus scheduling approaches was reported, many of them being in regular use.